My lovely friend Zeirah and I are challenging each other with a weekly blog post. We choose a topic and both write about. This week’s topic is all about our favourite Legion screenshots. You can read Z’s post about this topic right here.

***Heads up there may be spoilers in here if you’re not completely up to date with everything. So please proceed with caution.***

Ok so this week we’re taking things a little easier (or so we thought!) by having our topic of the week be our top 5 favourite screen shots that we’ve taken in Legion. I say it started out easy, but this is a really tough one. For starters we had initially said our favourite 1 screen shot. Not 2 minutes later Z asked if we could make it 5, which I laughed at because I was about to ask the same thing!

The thing is, how do you decide which screenshots to share? Do you share the ones that look pretty? Or do you share the ones that have a funny story or a sweet memory behind them? For me, I’ve gone with a little bit of everything. But it’s been really tricky to do, because Legion has been an amazing expansion so far, and the world we’re playing in and the memories I’m making right now are beautiful and plentiful.

(btw these aren’t in any particular order!)

First up – a memory

This screenshot to me represents everything we’re fighting for. This is the reason we have moved an entire city to the heart of danger – so that those who fight have not fallen in vain. Varian’s death makes me cry, even today. Regardless of whether you’re Horde or Alliance, you can’t deny the sacrifice that Varian made for his people, and for the whole of Azeroth. He knew that when he let go of that ship, that he was going to die. But he did it anyway, because it meant buying a little extra time so his comrades could escape. And in turn, maybe they would be able to find a way to defeat the Legion. He knew what would happen, and he did it anyway.

Right before heading to the Broken Isles I stopped by the patch of grass in Stormwind to pay my respects – I was over the moon to discover that Varian’s memorial was up. And so I turned the music up, knelt down and cried a little and gave thanks, and stood up to go kick some serious demon butt.

Next – a summary of being a restoration shaman! 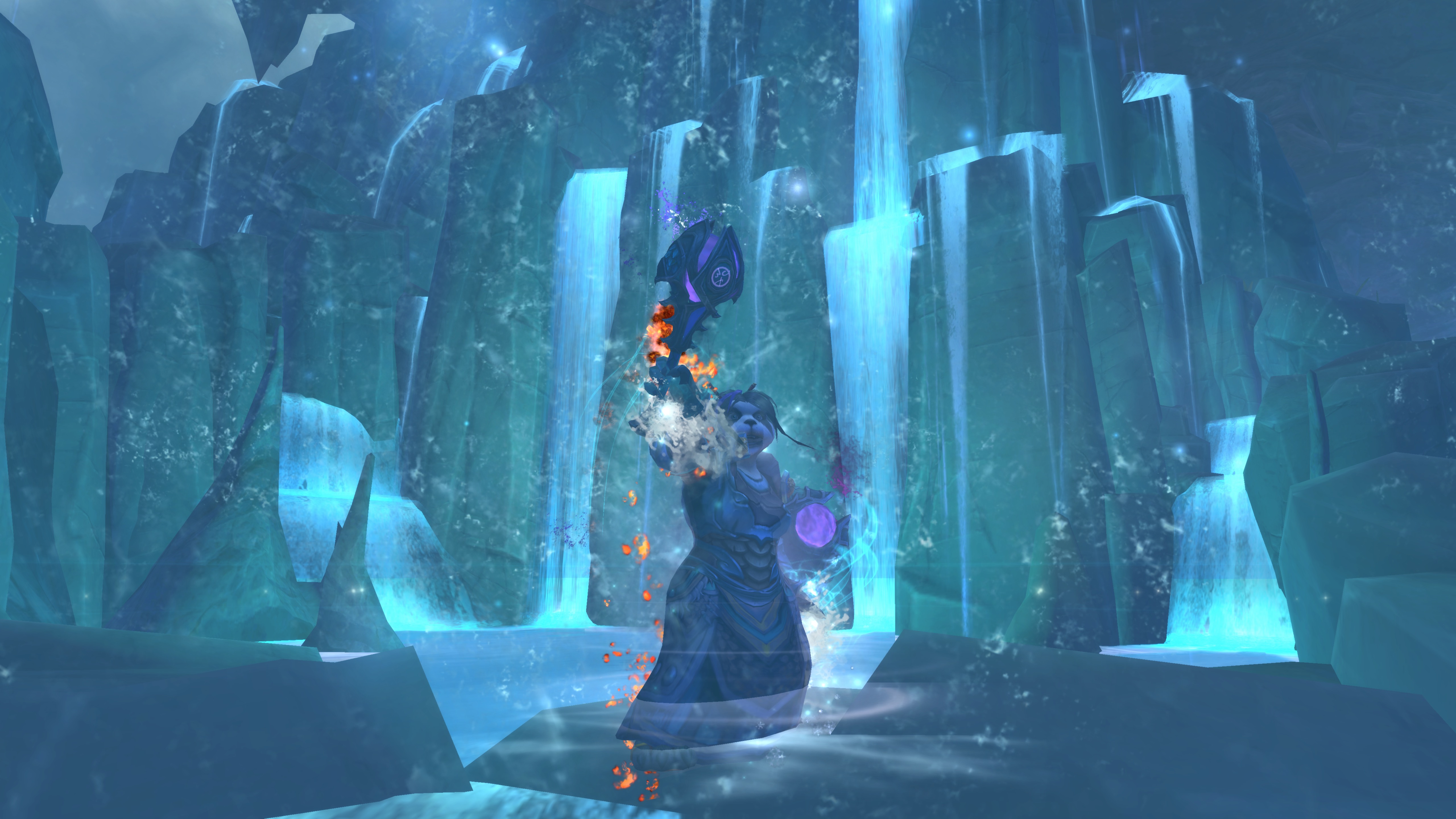 Ok it’s really tricky trying to choose one picture about what it means to be a shaman in Legion, but this comes close. This was taken in my class hall in the water area (totally appropriate for my resto shammy!) and she’s casting her artifact ability (and looking damn fierce doing it!) This was taken right before Emerald Nightmare opened, and it really is the culmination of a lot of research, patience, trying/retrying, gold and tears to get to this point. It’s been tough. But great 🙂

Next up is just a “pretty” one.

This is the ceiling in the mage order hall. I LOVE the order hall – it’s full of books and magic-y colours. It’s such a beautiful place. There are also portals to all of the different zones. But mostly, it’s the books that I love. There are little corners that you can sit in and watch the world (the view outside is, of course, Dalaran).There are some parts where the books are flying/floating around. It’s a really magical place and I just love it.

Next up we have (slightly spoilery!!) pretty and story –

This here is what happens after you defeat Xavius in the Emerald Nightmare. Killing him cleanses the Emerald Dream back to its intended state. And it.is.stunning. The beams of light coming through the tress, the lush green grass, the beautiful flowers, the beginnings of a yellow brick road. And of course Ysera (and well, everyone else we had to kill to cleanse the place!) Killing Ysera was one of the hardest things I’ve had to do in the game. I bawled my eyes out when I realised that’s what we’d have to do once she was corrupted by Xavius. It was painful, no matter how necessary. To see her back here in the Emerald Dream makes me feel a bit better – that she’ll always be here is a comfort. I mean, if you’re going to be left somewhere to live out the rest of your days, there are definitely worse places to do it!

And lastly, another beautiful + story pic (and also spoilers)

This happened for me yesterday. Right before you hit Exalted with the Nightfallen you’ll be offered a quest that involves (essentially) charging up the tree in Shal’Aran. It’s a detailed and dangerous process that even cost a life. But in the end, the tree survives. And even better – the fruit it bears cures the withered. Again, this one made me cry. I was crying before I got to the end because I was so worried about people dying in the scenario. And then when you see it was all worth it – well.

So there you have it – 5 of my favourite screen shots. There are so many more in my folder (over a thousand from Legion alone!!) so picking 5 really has been quite a challenge. Hope you liked them 🙂