Nighthold has been out for a couple of weeks now, and guilds everywhere have been poking around killing this and that, edging their way up to kill the worst of the worst – Gul’dan. Exorsus got there first, followed by Serenity, then Method. On Sunday night last week, Pit Crew killed Gul’dan on heroic difficulty, giving us Ahead of the Curve. huzzah!

Then last night we got our first mythic boss down – Skorpyron.We’d been really lucky and managed to recruit some new dps over the weekend, which meant we had a full 20 people on to run mythics, even though some regulars were away. It was great news. (Having said that, we are always on the lookout for more dps! So if you have the same outlook and goals as we do, and you’re looking for a team, have a look at our recruitment post.)

Skorpyron on Mythic is really interesting. He goes through different phases as time passes, and will break off different coloured chunks based on the phase he’s in. Each coloured chunk does something different – green pulses raid wide AoE damage, red only hurts if you’re near it, or if it gets hit by shockwave (but hurts everyone nearby a LOT when it’s hit!!) It’s essentially all about balancing the positioning of the chunks so you can hide behind the right ones. That and there’s green gunk all over the ground which kinda hurts a bit too. Overall it’s not a hugely complicated fight once you make a good plan. (I do feel bad for anyone who is colour blind, though!)

After Skorpyron we headed off to Chronomatic Anomaly, which just hits like a truck on mythic. On normal and heroic you can kinda ham it and not worry too much about things hurting if you stand in them or if you forget to take your bombs out far away. On mythic, there’s no wiggle room. If you don’t take a time bomb out far enough, you can potentially kill players. And if you don’t dodge the blue orbs well enough, that can kill you, too. For healers, healing off that debuff is a giant pain when time is slowed, and pretty drastic if we fail. We got him down around 20% I think? We ended up stopping an hour early because one of our raiders had to log off for awhile and we didn’t have anyone else around to fill in his shoes. So we went and cleared heroic ToV instead for the AP and legendary chance (our tank got one, so it was worth it!) I feel like we would have had the kill, though, if we had have kept going. Oh well, there’s always next week.

Nighthold itself is an absolutely beautiful raid. And it really should be, given who lives there! The elves have a lovely way of making even the most destructive things stunning. A couple of weeks back after a normal clear I went around and spent about half an hour to an hour just running around taking screenshots of the zone. I loved finding little details here and there that helped make the whole place really feel palatial. 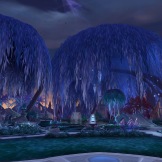 Ok, I might have gotten a bit carried away… It’s just that it’s such a beautiful place! And the gardens are out of this world stunning. I would happily sit in a corner with a book for all eternity in there. Just beautiful.

The bosses themselves are really great. There’s a lot of variety in the types of fights, so it’s quite interesting moving from one to the other. That and I feel like they make sense to the story of the raid.

Star Augur Etraeus gets another pic because this fight is STUNNING

Have you had a chance to get into Nighthold yet? Which is your favourite fight?