So the secret finding community has been at it again, and with the launch of 7.2.5 they discovered how to get the gorgeous Sun Darter Hatchling pet. It’s quite the puzzle, and incredible of them to have figured it out!

If you would like to get your very own Sun Darter, check out the comment on Wowhead with all of the instructions. I took a few screenshots along the way.

So before you head off to start this adventure, you need to be prepared with a whole bunch of random consumables. The comment has the full list. Most can be purchased from the Auction House, but some required some adventuring. Thankfully I already had the Gordok Ogre Suit on an alt, so I only needed to get me Scotty’s Lucky Coin, Noggfenfogger Elixr, Winterfall Firewater, and some Dire Brew. Most were straight forward (although Scotty was tricky to find!) But the Dire Brew… argh. I have always gotten so damn lost in Blackrock Depths, and this time was no exception. I was running around that place for almost an hour just for this. I was most frustrated! But I got there in the end.

The other sticking point for this was the Major Nature Protection Potion. All of the other potions were available on the AH for a reasonable price, but the Nature potion- well that one was selling for 10k and up. I just couldn’t justify it. I understand the reasoning- you need to be exalted with Cenarian Expedition to purchase the recipe, and some of the mats can be tricky to get… but still. 10k was a bit excessive. So I looked in my guild list to see if anyone in guild had the recipte. There was 1 person, but they weren’t on very often. Even still, I went off and sourced all the mats for the potion, and waited for them to log on. They did not. In the end I looked on the AH and saw the price had dropped to 5k, so figured stuff it, and bought one. lol

So off I went on my adventure! I had never ever been to the part of Azeroth that this cave was found in. I personally found the area really magical. There was just something about it that said “adventures happen here”. I think I’ll just go back every now and then to sit around. It’s a beautiful spot by the sea. 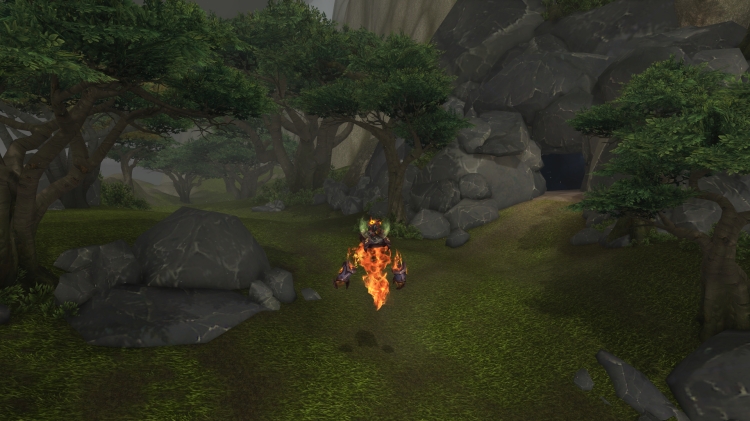 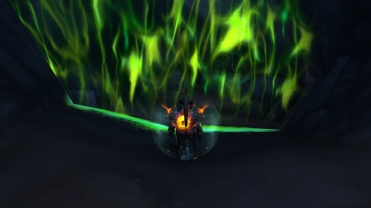 Once you are through the fel wall, it’s time to turn into a skeleton. I had bought 20 Noggenfogger Elixrs in case it took me awhile to change to a skeleton, but wouldn’t you know it? Got it first go. So I snuck past the first gargoyle…

I then came to a fork in the road. The instructions said to go to the vined wall first, so that I did. Using Scotty’s Lucky Coin I turned into a sprite, and was able to freely pass through the wall, to collect a stone from the puddle inside. Once back out and in front of the blue wall, I used the stone and got all wet! But I was able to pass through onto the next area. 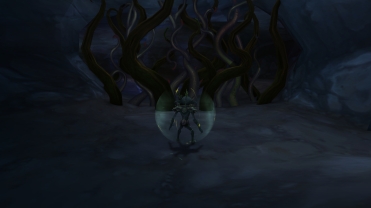 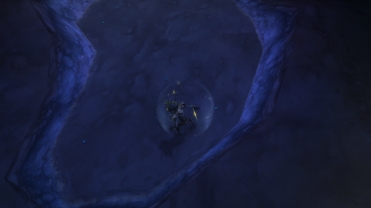 This is where the Dire Brew got used, and I turned into a Dark Iron Dwarf. I was able to dance right past that guard with no worries at all!

The path then split into 3 options. First we had to go up a ramp to a purple wall. Using an Ethereal Oil, I was able to pass through the wall to what lay beyond. This part was the part I was most impressed with. Inside this room was a strange stone with a hole in the middle of it. The idea is that you need to put your arm in the hole to get a special buff. But your arm has to be the right type and size. The secret finders figured out that if you use the Gordok Ogre Suit and Winterfell Firewater, you’re just the right size! And shove my arm in, I did.

Out I went, and this time faced a caged wall. I drank Pygmy Oil until I turned into a Pygmy and could run through the bars. Inside was a myterious cube that wanted to see “an amusing heir”. Well my perky pug in a princess outfit would do just the trick! Second buff received.

Then it was through the last wall that was now opened up. It was kinda creepy inside. There was a plaque to the right which I clicked on. Then swapping a few buffs over, I walked across the water to click on the Oddly-Colored Egg- and the Sun Darter Hatchling was mine! 🙂

This was just so much fun to do. I hope that the secret finding community had a great time figured it all out! 🙂