During the Christmas break I had made the decision to get the Corrupted Ashbringer skin for my retribution paladin artifact (the hidden appearance). I looked up on wowhead what I needed to do. I knew it was quite a detailed expedition, so was not surprised at the number of steps involved.

The first step, however, involved collecting 2 books- one that was a random spawn in a dungeon, and the other from a pvp battleground. I was immediately put off from my mission. I’m not great at pvp as it is. The thought of having to try and do something else during that pvp experience made me nervous. I mentioned this in guild, and was delighted to find out from a guildie that the book required (Nat Pagle’s Guide to Extreme Anglin’ ) was not bind on pick up. I was able to buy it from the Auction House! So off I went. Unfortunately, there were none available. I put a pin in my plans, and vowed to check each day to see if a book would appear on the AH. And the promptly forgot.

Then on Saturday, I remembered again that I wanted to do this, so off I went to the AH, and there is was! It wasn’t too expensive either, so I bought it immediately. The guide I was followed mentioned the next book I needed to get, A Thoroughly Read Copy of “Nat Pagle’s Guide to Extreme Anglin’”, was a rare spawn in Dire Maul. Paladins are so slow, so the guide suggested farming for this on a toon with lots of speed boosts, so I took my little Demon Hunter in, just for fun. I looked on the map to see some spawn points, and chose one at random. So off I went, and wouldn’t you know it, the book was right there!!! I found out afterwards that the spawn of the book had been made more common, so I felt a bit less lucky after that, but it did make things go faster.

Next up was a trip to Blackwing Lair for Nefarian’s Head. Unfortunately I didn’t score any pets or transmog, which was a little disappointing, but it passed quickly enough. Next up it was back to my order hall, to speak with someone who might know about the books and what they’re talking about, Sister Elda. (The whole purpose of the chain is to figure out the story in the book, to find the Shard of Darkness that will corrupt Ashbringer (and give the appearance)).  Of course she sent me back to Dire Maul, where I spoke to Prince Tortheldrin. HE then sent me off to speak to someone else (I’m noticing a pattern here…)

As an Alliance I was sent to speak to Alexia Ironknife at Chillwind Camp.

No surprises here- she doesn’t know anything either, and send me off to read someone’s journal (bit personal, really!)

Guess what? Still no answers! All we get is a clue as to where the remains of someone may be found… in a grotty slime. Now this is the part where I expected to have to wait some time. I’d been told the spawn timer on the slime was really long. Despite that, I headed off to Thondroril River in Western Plaguelands. As expected, the slime wasn’t here. By this time my alt run was due to start, so I left her sitting near the spawn point, and off I went.

The next day I went about business as usual for quite awhile before remembering I was working on getting the skin (I really am getting quite forgetful!!). I logged on to my paladin, and wouldn’t you know it, the slime was right there in front of me!! I waited a few minutes and looked around to see if anyone else was waiting for the slime to spawn, but it appeared I was alone. So I (very slowly!) killed it, to get the next piece required. The item the slime dropped was Timolain’s Phylactery. I used it be the river and spoke to Timolain the Accursed who revealed (dun dun duuuuunnnnn!!!) that the Shard of Darkness we were looking for was right there in the river somewhere! All we had to do was fish for it.

Now I had heard nightmares about this fishing part of the questline. I expected to be at this for hours, if not days. So I set myself up with some Netflix on one screen, and set about fishing. In a way I was almost a little disappointed when, less than 15 minutes later, the item dropped for me. Almost 😉 From here it was smooth sailing. I went back to my order hall to speak with Lord Maxwell Tyrosus (who was not at all impressed with my request to corrupt Ashbringer, let me tell you!!). But being obedient as he is, we went on a journey to the Death Knight order hall, Acherus, to undertake the corruption process. I really liked this part of the quest line. Firstly, there’s something naughty about being in another class’s order hall, so it’s a bit of fun. Secondly, it was just really nicely done. Tyrosus is just not happy throughout the whole thing, and wanted to get out of there as quickly as possible. Me, on the other hand, well I was determined to get my light-ridden hands on everything hehehe! We meet with the Four Horsemen and convinced them to create the final piece – the Heart of Corruption.

They were a bit reluctant, but we convinced them in the end. I roamed around a little to try and explore, but the floor was blocked off and I couldn’t go anywhere else, which was a little disappointing, but not unexpected.

In the end I got Tyrosus out of there and back to the safety of the paladin order hall, where I learned the hidden appearance. 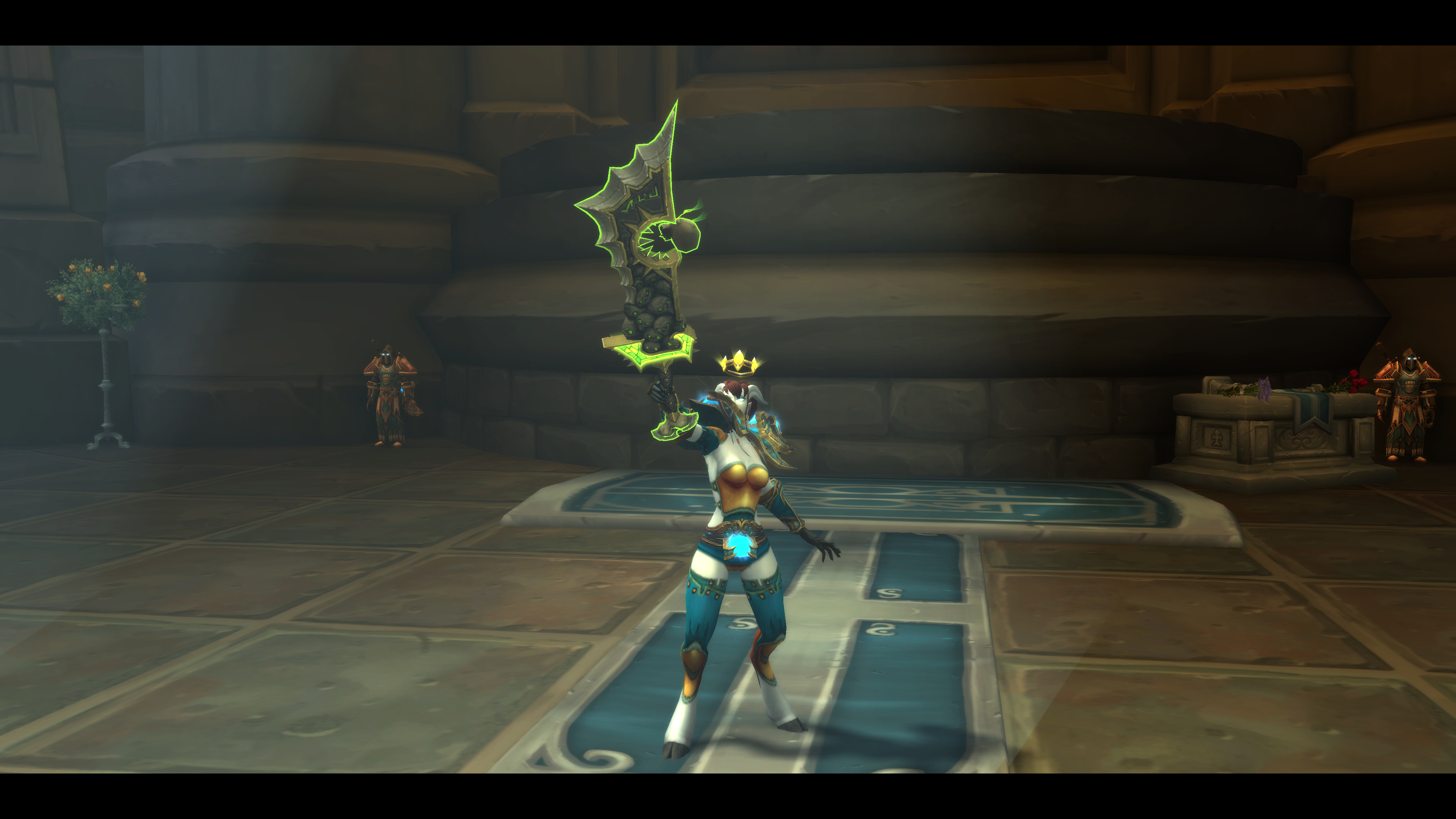 Of course the first thing I had to do was come up with a new transmog to match the appearance. I found some bright green pieces that I thought would work well…. and yeah there we are. Corrupted Ashbringer acquired. 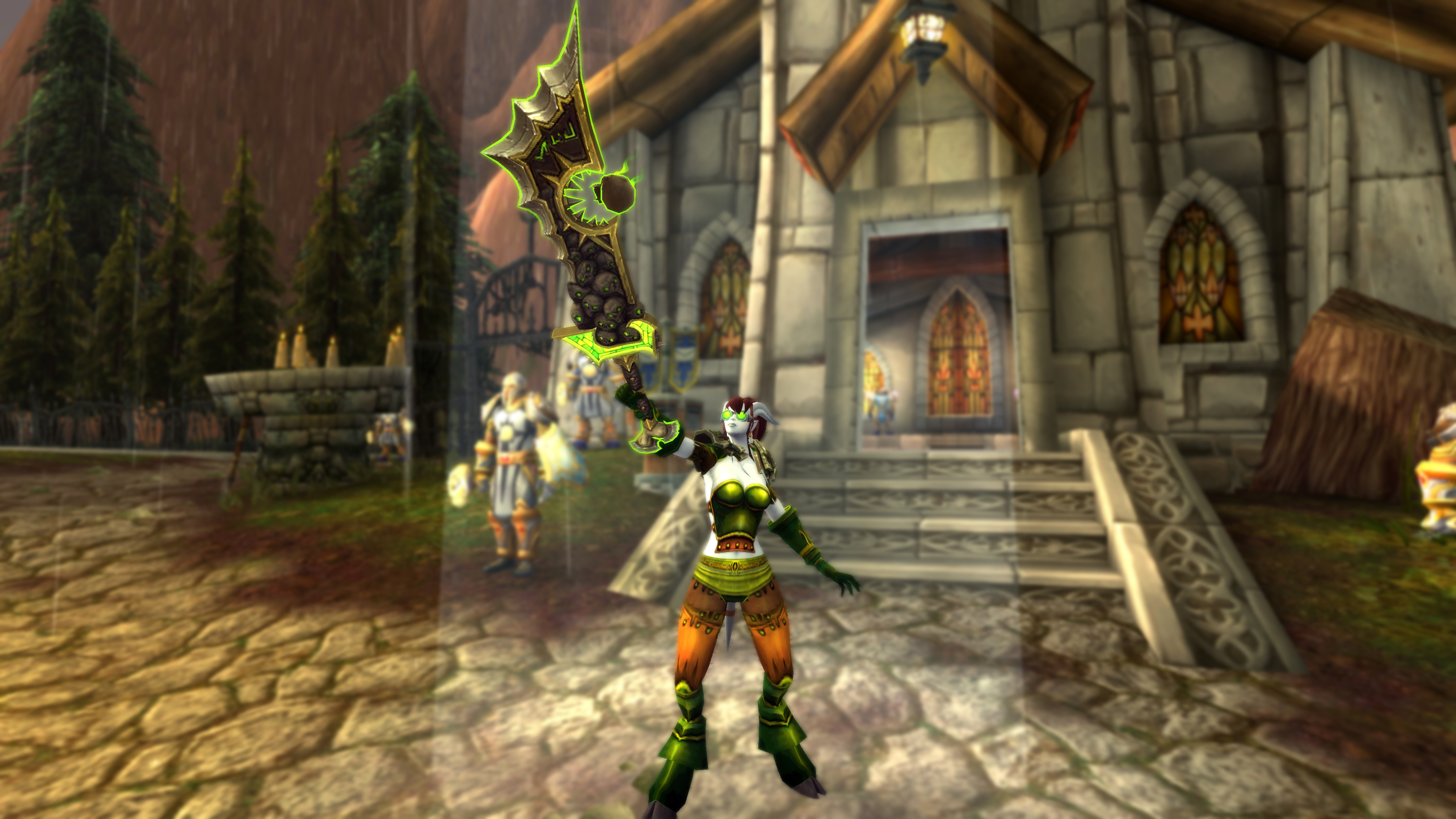 I know I had it a lot easier than those who were working on this when it first came out, but I still had a lot of fun with it. I’m not sure that I’ll keep using the appearance. It’s great an all, but honestly I prefer the original. 😀

Now to figure out which appearance to get next.