How is it that a month has passed since I wrote in here? Usually this happens when I’ve spent a lot of time out of the game and have just been busy with work, but that’s not the case this time (although the being busy with work is definitely true!).

Anyways, it’s been awhile, so I thought I’d best do a catch-up post to let you know what I’ve been up to and what I have planned.

So first up, probably the biggest reason I’ve been writing less in here is that I have been streaming quite a bit. It initially started to stream our raid nights, which was fun and all. But then this happened: 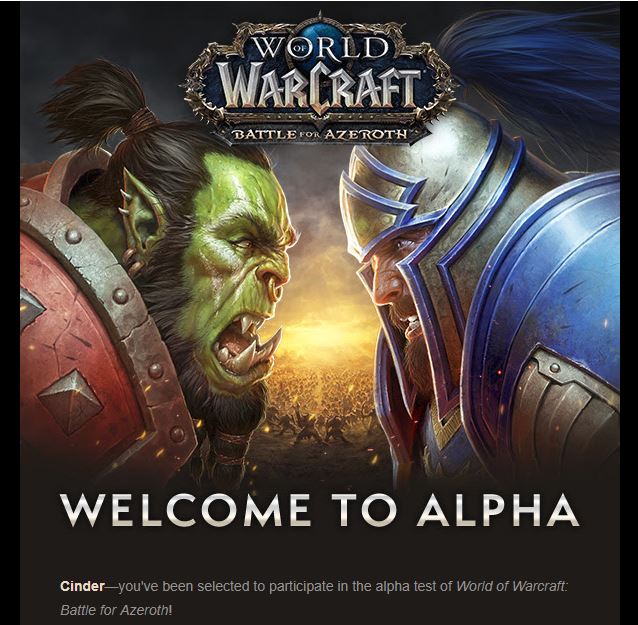 For reals! This was me at work when I got the email. Followed shortly after by tears.

I’ve been spending a bit of time in the Alpha running around and seeing how things are, reporting bugs and typos in quests and what not. And I’ve been streaming it, which has been quite fun. I don’t have a lot of viewers on raid nights because it’s a silly time in the US, but when I stream on weekends there are more people around, and it’s really enjoyable. I’m not a great streamer; I don’t show my face (because no-one needs to see that!) and I ramble a lot and get distracted, but hopefully it’s a little entertaining to people.

The other weekend I had a great time hanging out in alpha with some lovely friends in chat. We go to experience a terrifying quest line that just freaked me out so badly. It was scary and hilarious. I made a video about it, which was fun! It’s over here on YouTube if you’re interested. (WARNING: contains Alpha spoilers).

Between streaming all the raids and now the Alpha as well, I’ve been clocking up a decent amount of streaming time. And somehow have managed to get a reasonable number of followers and viewers… enough that this ended up happening the other day:

This basically means I’m able to have subscribers and stuff, which is kinda cool! I don’t actually expect this to go anywhere, but it is kinda fun 🙂 I celebrated by setting up a new overlay for my stream and making some new panels to match. I’m trying to get better at streaming, but I know I’ll never be anything interesting. I’m just doing it for the fun 🙂 If you want to stop by I’m over at twitch.tv/cinder_streams. (note: I will always say if I’m streaming Alpha so that if you’re not wanting spoilers, you can avoid them).

I KNOW! This was completely random, but we’ve started up Battletagged again. This time it’s going to be a lot more casual, with episodes being recorded when we have something to say (rather than trying to stick to a strict schedule). It’s just me and Neuro at the moment. We talk about it a bit more in our first episode back. We’ve got a new website address – Battletagged.com.au – but everything else should be the same. We’re back up on Stitcher and iTunes. Have a listen! And if there’s anything you’d like us to talk about on the show, let us know. 🙂

Raiding has been going ok. We had a rough time with Kin’garoth as well… for awhile we just weren’t really using a strat that worked for us (one of the challenges of there being so many different strats available for a boss!) In the end we got there though, with a strat that seems weird, but it’s what works for us, so that’s good!

After that it was Varimathras which we managed to get down really quickly actually.  (I still need to make a kill video for it- oops!!) This week we went back to do a re-clear which took us awhile, but we do have a whole night to work on Coven tonight, which is going to drive us up the wall, but should be do-able either this week or next week.

So real-life stuff. Well, I got a promotion- huzzah! That was nice. But I has also meant that my workload has increased quite substantially. At the moment I don’t mind tooooo much.. it’s been really great the past week actually because part of my work requires us to do public consultation to get feedback on what we’re doing, and then check in again with everyone at the end to make sure we did what people wanted. I’m at that end part now, with checking in, and I’ve been getting some really lovely messages back, saying how impressed they are with our work etc. It makes all the extra hours worth it, you know? (That and I do honestly feel like the work I do has the ability to do some good in a small way, so that’s great too). Anyway, all of this has meant super busy days at work, which some people have noticed because I’ve also been neglecting twitter!

Anyways, that’s where things are at at the moment. I have to finish off my bucket list blog post (which is part way written… but might be December by the time I finish writing it! lol) I also want to do some posts about the alpha and the class changes and things like that… I just keep running out of time to do all the things I want to do. Gah! Why is sleep a thing, eh? Or maybe I could just be younger so I could deal with having less sleep. I hope everyone reading is doing well. I promise to keep trying to write more often!

3 thoughts on “The catch-up”