My lovely friend Zeirah and I have turned our weekly blog challenge into a public blog challenge for anyone to participate in. Each week there is a new topic for everyone to write about and share. You can read everyone’s favourite Legion quest on our website here. You kind find Z’s post about the topic right here.

Legion has been wonderful with questing. The best thing about Warlords of Draenor had been the questing, and I was curious about how Blizzard would go about making it better. I was also curious about how well the stories would play out given that we could go in to each zone in any order that pleased us – how could they possibly make it all make sense and tie in together when we can essentially do a “choose your own adventure”? Somehow they did it. I mean, they really nailed it. I stayed in each zone (except Highmountain because I was max level within 5 quests there!) until they were completely done. Or so I thought. Because funny thing – when I go back to do World Quests I keep finding hidden quests that pop out of nowhere. It’s really wonderful.

So to choose a favourite quest out of all of this beautiful story has actually been quite difficult. I really enjoyed the Farondis quest line – I truly felt for him. And Runas. And the whole line involving Ysera was amazing. And the story in Suramar! When I first met the withered in Azsuna I was awful and dismissed them as possessed junkies who had gone past the point of being people and had reverted to being blathering creatures. But when I got to Suramar and saw what was happening, my entire opinion changed. I feel for them, and I feel dreadful when I have to kill them. I have hope that we’ll be able to do something to help them long term. Archanist Thalyssra is fast becoming one of my favourite NPCs – I have become very fond of her.

But I digress. The quest that I have chosen as my favourite is one of many favourites, but is one that stands out for it’s creativity, how much it made me mad, and how much it made me laugh. 🙂 I’m of course talking about the Murloc quest line in Suramar, DO THE THING! (Note: no idea of the gender of our leading murlocs here, so I went with a gender neutral “them/they” for our two lead characters)

note: I’m going to talk about the whole quest line here (though I won’t tell you how to do any of it – that would take all the fun out of it!) If you want the whole thing to be a surprise, stop reading now.

We meet Phin where Azsuna, Suramar and Val’Sharah intersect. (Technically waypoints are Suramar – 15.2, 52.2) The only requirement for accessing this quest line is that you are at 110 level, and I’m also assuming you need to have done the Suramar opening quests.

Our adventures with Phin are exactly what you’d expect from a situation where language is not common – lots of attempting to talk anyway, lots of exclamation points and LOTS of body language. And most of all, a lot of “oh god, what do you want me to do?!!?!”

When we first meet Phin, we find him rummaging around the beach, throwing bits of seaweed here and there, looking for something. When we “speak” to him, he offers us the quest Do The Thing! The quest text is this:

Really not helpful. Even less helpful, is that when we accept the quest, everything starts glittering like it’s related to the quest. And Phin just stands there with an expectant look on his face, waiting for us to fix the whole situation.

This is what the entire quest chain is like. Phin rambles to us, gesticulating wildly, then sends us off to do something that we know nothing about. It really is quite glorious, and oh so frustrating. But it is all made up for with just how utterly hilarious the whole situation is, and the fact that the item text perfectly matches exactly what we’re thinking while we’re helping Phin.

It eventually comes to pass that we have been trying to help Phin get something nice for their murloc love, and so off we go to watch the scene unfold. Spoiler alert – it doesn’t go well. Daddy murloc does not want his murloc offspring being involved with such a lowly commoner. There is an argument, and Daddy murloc quite literally kicks Phin out of his home!

You can’t understand a thing that they are saying, but the disgust is right there in the actions and body language and the whole kicking thing. You can’t help but feel sad for poor Phin. So we follow them out, leaving Mrgrlilgrl with their awful father.

Phin is pretty pissed. Like, really pissed. They’re in love, and they’ve  spent so much time trying to find something to win over Daddy murloc. But noooOOOooo – Phin’s not good enough. Well, we’ll see about that! Our next quest appears to involve us helping Phin find a murder weapon (not even joking)

So off we go again not knowing what we’re doing or where we’re going. This quest was the hardest one of them all when I did it the first time – there were no clues in the area at all, so I really had to wing it. And because it was at an intersection between 3 zones, I kept getting phased. But I pressed on. It looks like they’ve made some improvements to the quest because things were more clearly marked on the map, and the phasing wasn’t an issue the second time I did this.

Phin was kind enough to help out when things got dangerous.

Eventually Phin finds whatever stabby thing they were looking for, and we race back to (potentially) commit an awful crime. But when we get there, a crime has already been committed!

Daddy murloc has been taken away, Mummy murloc is stuck in a web and Phin’s love has been knocked out – Phin must save the day!!!

The awful spiders in Suramar have taken Daddy murloc hostage, and it’s Phin’s/our job to find him.

Eventually Daddy murloc is found – Phin as saved the day! How ever will Daddy murloc repay Phin for saving his family? Oh, we all know what Phin wants…

Daddy murloc is not happy about it, but what can he do – Phin saved the family! (Serious props to the voice actor who played Daddy murloc – he nailed disdainful murloc!!!) And so Daddy murloc agrees that Phin and Mrgrlilgrl can be together.

And they all lived happily ever after… 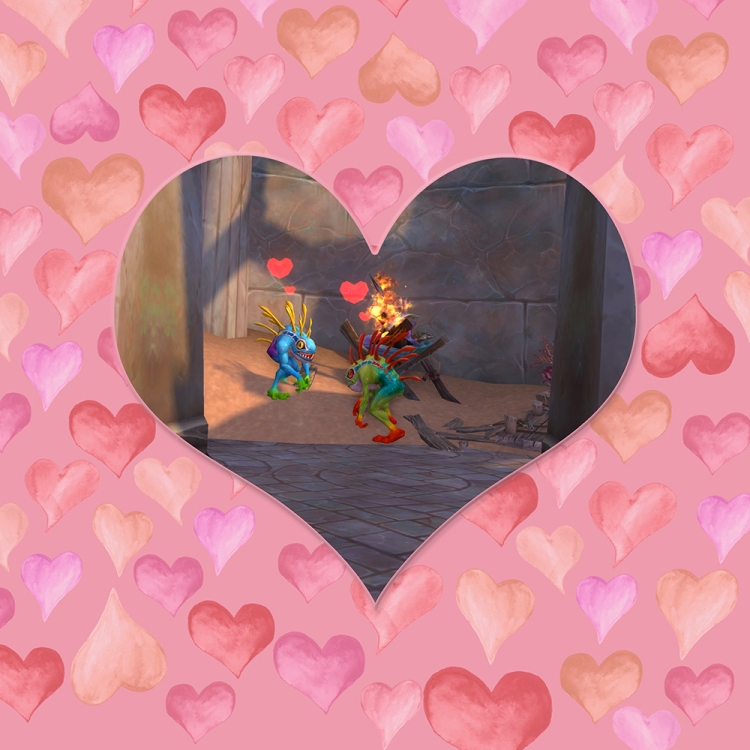 So that was one of my favourite quests in Legion. What was yours? If you want to write/draw/vlog about our topic of the week, please do! you can join in each week at http://zandcindersblogchallenge.wordpress.com