Well ok that’s a misleading title. I keep getting random Christmas songs in my head so I dunno, it just happened.

So earlier this week I was bumming around damaging eternity by killing time just kinda not really doing anything. I’ve been spending a lot of my game time doing my emissary quests and getting artifact power, and on this night I just didn’t feel like doing that. I was staring at my character screen trying to decide what to do. And for whatever reason I decided to log on to my paladin to get her Ashbringer. I’m glad I did!

Our journey begins in Dalaran, with one of the most impatient little shits I’ve come across in game – Lord Maxwell Tyrosus. I didn’t get a screen shot of him at the time, unfortunately, but oh my gosh did I want to throw him off Dalaran! I was running around to my profession trainers to get the starting quests and this fellow kept following me around and kept butting in with “I must speak with you at once”, and “I must interrupt, this is of upmost importance” blah blah blah. Yes dude, it’s important, I get it, but I need my profession quests, dammit!

Anyway, he tells me to go gather some friends and meeting him again for a very important journey – to get my artifact. I’ll level my paladin as Retribution for awhile, just to see how it plays out, so Ashbringer was the way to go.

Despite seeing Tirion die on the Broken Shore directly below us, we get sent away to speak with Uther at his tomb, so off we go.

There are a couple of little quests to do there, which was handy because it gave me a chance to figure out how to play ret again. Once the quests were done, we speak with Uther, which, I have to admit, was pretty cool. Lord Maxwell practically jizzed his pants he was so excited by it all. I had to giggle.

Unsurprisingly, Uther tells us Tirion (and Ashbringer) can be found on the Broken Shore. SHOCK HORROR!!! But before we go back, we need to get more people to fight with us, so we head to Light’s Hope Chapel for troops.

Then, it was back to the Broken Shore.

In news that will surprise no-one, Tirion did not actually die during the Broken Shore scenario – he’s just mostly dead. And unfortunately is being tortured pretty badly. To be honest it’s quite awful. So I felt a lot of righteous anger welling up in me as I cut down those damn demons one by one. (For the record – ret pally, super strong! I had no gear and an outdated heirloom weapon and still managed to kick butt!)

We discover Tirion’s location, and also the location of Ashbringer, so off we go to claim it before the evil demons do. Fun fact – I found this place very early on in the beta when there was nothing there. I remember wondering what it would be used for – I particularly loved the light breaking through the crack in the cave ceiling – really beautiful. 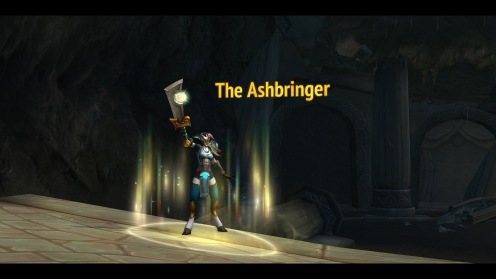 So Ashbringer was in my hands. And of course demons don’t like us being powerful. Especially not this one – we were going to take away his toys! And a great battle was had, in which he attempts to capture us to torture us the way he is torturing Tirion. I may have gotten a little sassy…

There actually a really beautiful moment where you’re trapped, ready to be taken away and destroyed. And then this calm comes over you, and you hear Tirion’s determined voice say “Light, grant me the strength to shatter these bonds”, and you get an extra action button to do exactly that. It was genuinely awesome.

Battle over, Lord Maxwell comes back to tell me Tirion is asking for me by name, and is running out of time. He then tells me I must take up the blade, and come the Ashbringer. And then the light leaves him. It’s pretty emotional. 😦

We have to get out of there quickly, though, before more demons rock up, so we take Tirion to lay him to rest at Light’s Hope Chapel. This is where we discover there has been a secret section underneath the chapel all this time – amazing!

Looks a little suspicious at first… but as you head down it starts looking as things should.

At the bottom of the stairs are some people who are waiting to greet you. 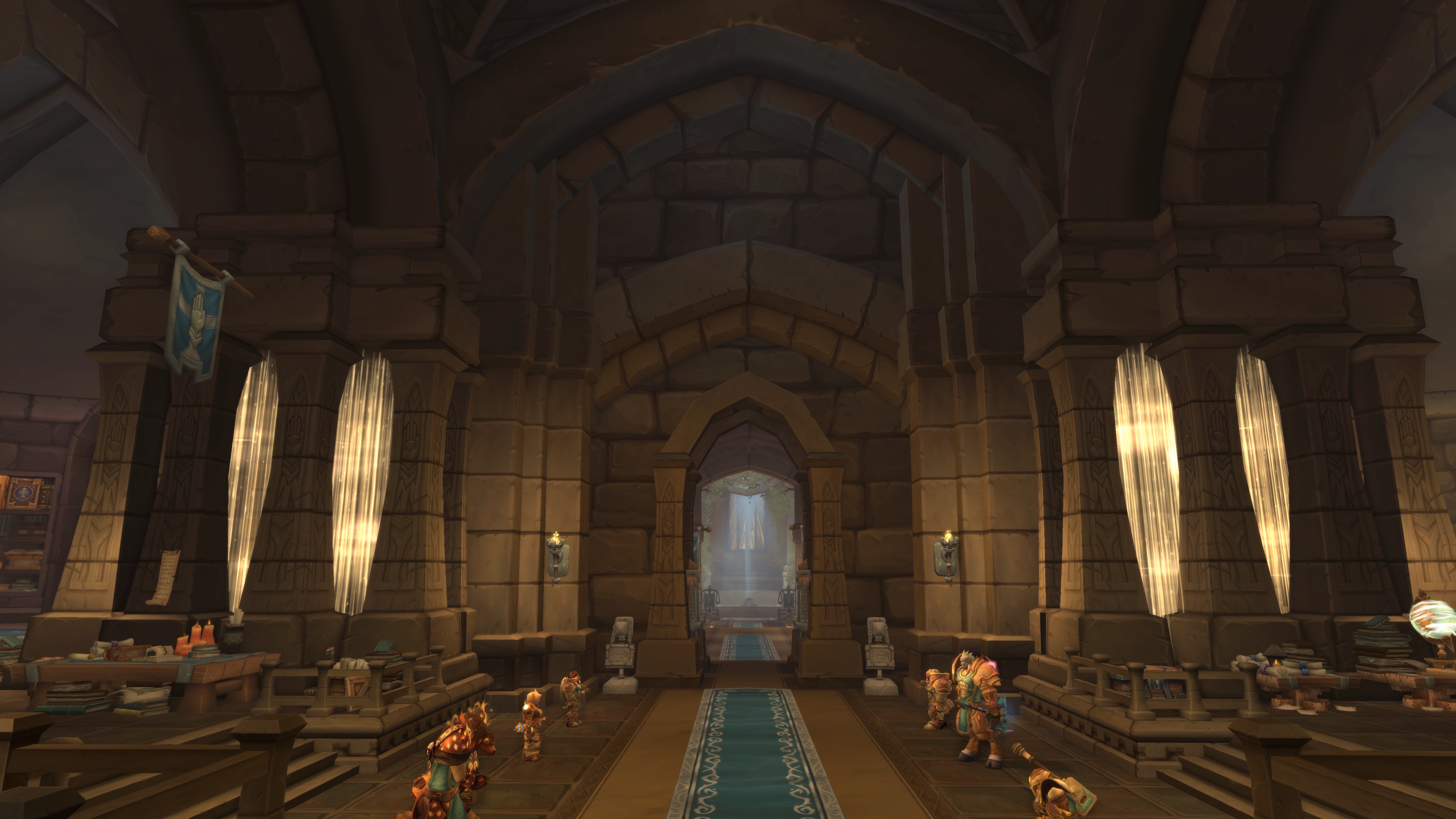 Then, as you start walking past you, they bow to you, like the damn hero you are. 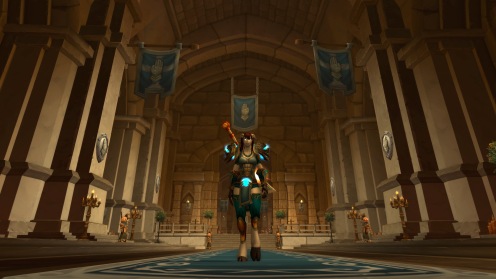 I RP-walked the whole way down to the alter. Not only because I got a kick out of everyone bowing to me, but also it just felt like the right thing to do. This was Tirion’s farewell, a moment to mourn a leader, and a moment to recognise shit’s about to get real.

At the alter, Lord Maxwell gives a wonderful speech about Tirion, and also about me and how there’s no-one better than me to lead everyone in the dark days of battle ahead. I am going to be the saving light. So I write my name in the glowing golden book, people pledge allegiance to me, and everyone in that chapel cheers for me. Of course it’s lovely for the ego, but that aside, it was a really beautiful moment. 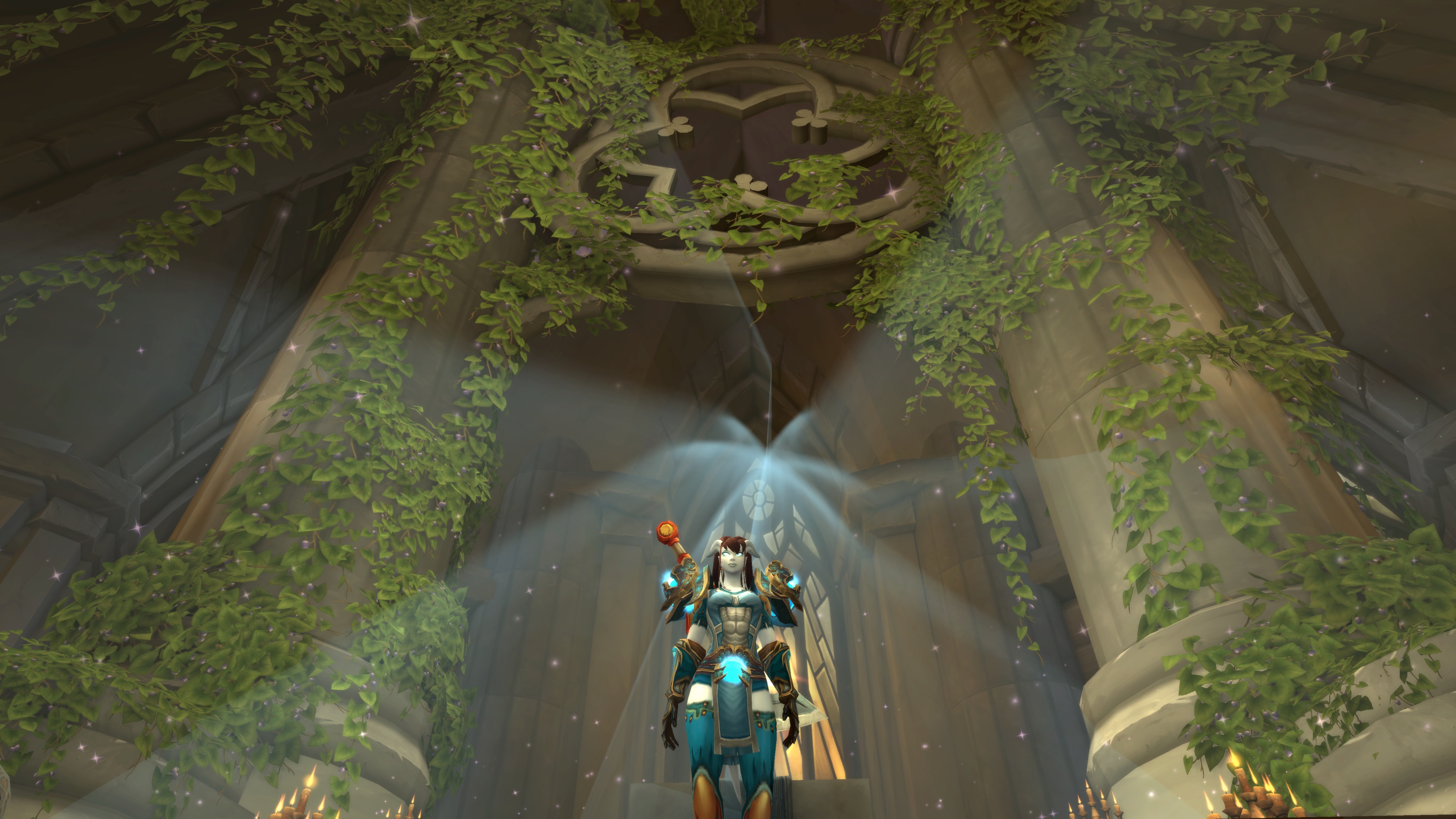 I didn’t get to do anything more than that. I had intended to see what was on the weapon racks for me to see if my transmog pieces were showing up, but it was really late so I logged off. But I really, really liked that artifact acquisition quest line, and I’m looking forward to seeing how the order hall campaign plays out.